There is also another module called glob which provides a glob.glob() function that can be used to find all the files with extension. The glob module identifies pathnames whose patterns match a given pattern, as defined by the Unix shell.

You can also use the os.listdir() method to list all the files in Python.

For example, see the below screenshot. 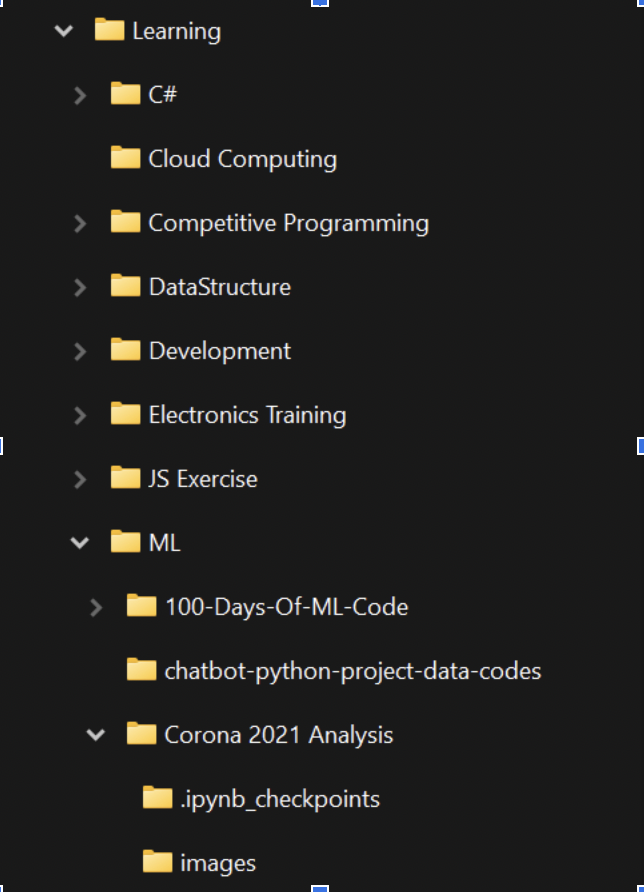 In the above example, a directory called the “Learning” directory contains various no. of folders such as “C#”, “Cloud Computing”, “Competitive Programming”, “Data Structure”, “Development”, “Electronics Training” and many more. Below each of these folders is numerous files with varying extension names, such as ‘.txt’, ‘.bin’, ‘.py’, and many more.

The os.listdir() method returns a list containing the names of the entries in the directory given by the path. In addition, it returns all the files with extensions in Python. The OS is a built-in Python module that provides a portable way of implementing operating system-dependent features.

We get the list of all the files with extensions using the os.listdir() method.

The glob.glob() is a built-in Python function that retrieves paths recursively from inside the directories/files and subdirectories/subfiles.

It returns all the files contained within a directory.

The code returns only the file names with .txt as file extension in the above example, i.e., “data.R“, “Pro.R“.

In this article, we learned about how to find all the files with extensions in Python using”

NOTE: There is no need the exclusively install these modules because these are built-in modules and when you install Python, these are automatically installed.

That’s it for this tutorial.

How to make requirements.txt file

How to close all subprocesses in Python

Krunal Lathiya is a Software Engineer with over eight years of experience. He has developed a strong foundation in computer science principles and a passion for problem-solving. In addition, Krunal has excellent knowledge of Data Science and Machine Learning, and he is an expert in R Language. Krunal has experience with various programming languages and technologies, including PHP, Python, and JavaScript. He is comfortable working in front-end and back-end development.